How is prostate cancer diagnosed?
A prostate biopsy is required to diagnose prostate cancer. This involves using a special needle to take small pieces of tissue from different parts of the prostate. This tissue is then examined by a pathologist to determine whether cancer is present and, if so, how much cancer if present and whether it is an aggressive subtype. Prostate biopsy can either be performed through a transrectal or transperineal approach.
The decision to perform a biopsy is based upon the patient’s likelihood of prostate cancer. This takes into account the result of the PSA blood test, any abnormalities noticed on finger examination of the prostate, and whether the patient has a family history of prostate cancer.
What is PSA?
Prostate specific antigen (PSA) is a chemical produced by prostate cells. Its purpose is to support the sperm by helping keep semen in a liquid state. Whilst normally secreted into the semen, PSA can backflow into the bloodstream and be measured using a blood test.
There are many different reasons why the PSA level may be raised. These include:
PSA levels can fluctuate over time and vary from person to person. A man with significant prostate cancer may have a normal PSA and, in the same way, a man who does not have prostate cancer may have a raised PSA.
PSA density is a measure of the PSA level relative to the volume of the prostate. It is useful in men who may have an elevated PSA due to an enlarged prostate. A PSA density of > 0.15 carries an increased risk of prostate cancer.
The free/total PSA ratio is another refinement that can help assess risk. Men with prostate cancer have a greater fraction of PSA that is bound to other proteins in the blood, meaning they have a lower “free” PSA level.  Men with a free/total ratio of < 0.1 have a 56% chance of having prostate cancer. Men with a ratio > 0.25 have only an 8% chance of harbouring the disease.
Other tests
Multiparametric MRI of the prostate
An MRI (magnetic resonance imaging) scan of the prostate can detect areas that are suspicious for prostate cancer, thereby allowing a more precise prostate biopsy.
MRI can also show whether the cancer has spread locally outside the prostate gland. This allows the surgeon to tailor his or her operation to maximise cancer control while still, if possible, preserving the nerves that control erections and continence.
PET PSMA
These new scans are very sensitive for picking up recurrent or metastatic prostate cancer. They are often performed in conjunction with CT scan to maximise anatomic information. Many surgeons now use PET PSMA instead of bone scan when staging their high-risk patients.
Grading and Staging
The combination of biopsy and imaging tests help determine the grade and stage of cancer.
Cancer grade is a measure of aggressiveness. A pathologist classifies cancer grade according to the appearance of the tissue obtained from biopsy or prostatectomy. For the last fifty years the Gleason grading system has classified prostate cancer from a score of 6 (least aggressive) to 10 (most aggressive). From 2016 the new ISUP (International Society of Urologic Pathology) score will gradually be introduced. This system is more intuitive, grading prostate cancer from 1 (least aggressive) to 5 (most aggressive).
Cancer stage describes the amount of cancer present and whether it has spread beyond the prostate. When the cancer is confined to the prostate gland it is called “localised” prostate cancer. If the cancer has spread outside the gland to nearby structures such as the seminal vesicles, bladder or rectum, it is called “locally advanced” prostate cancer. “Metastatic” prostate cancer is cancer that has spread to the lymph glands, bones, lungs or liver.
This information can be combined to place patients into groups that stratify the risk of the cancer coming back after treatment. Patients are considered Low Risk if they have Gleason grade 6 cancer (ISUP Grade 1), PSA < 10 ng/mL and tumour in no more than one half of one lobe of the prostate on finger examination. If the Gleason score is 7 (ISUP grade 2 or 3), PSA between 10 and 20 ng/mL, or the tumour encompasses more than half of one lobe, but not both lobes, then the patient is at Intermediate Risk of cancer recurrence. High Risk patients have a PSA > 20 ng/mL, Gleason score between 8 and 10 (ISUP grade 4 and 5) or cancer in both lobes of the prostate. 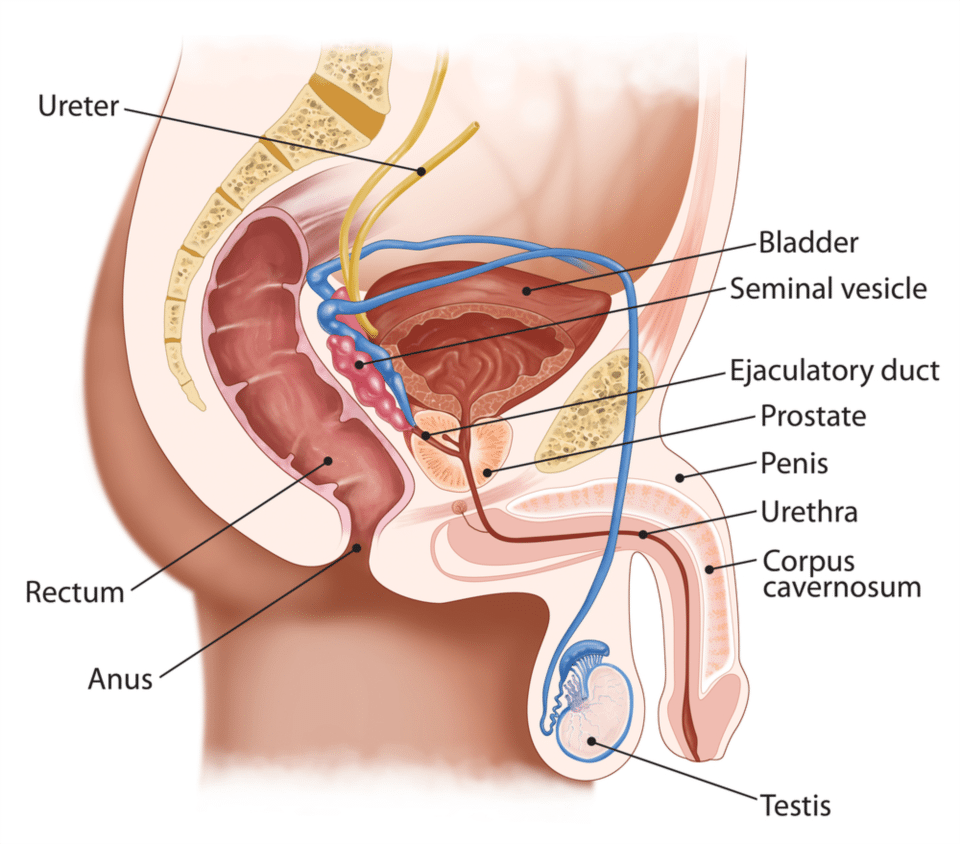 There are several different options for treating prostate cancer. The choice of treatment must take into account a patient’s age, general health, the grade and stage of their cancer, the likely side effects of treatment and the severity of their symptoms.
The following table outlines the options for treatment depending on whether the cancer is localised, locally advanced or metastatic. This decision should be made through discussion with your treating specialist.

Sometimes the initial biopsy misses an area of high-risk disease. A repeat biopsy, called a confirmatory biopsy, is usually performed within 12 months of the initial biopsy to minimize the risk of missing these more aggressive cancers. An MRI-fusion transperineal biopsy may be considered to maximise coverage of the prostate and target any suspicious areas.
What are the triggers for active treatment?
Triggers for active treatment should be tailored to the circumstances of each patient and discussed prior to embarking on active surveillance. These triggers may include:

What does surgery involve?

Radical prostatectomy involves removal of the prostate, seminal vesicles and, in many cases, the pelvic lymph nodes. It can be performed through either an open or robotic approach. In localised prostate cancer the goal of this operation is eradicate the disease while preserving continence and, if possible, erectile function. It is suitable for men who have a life expectancy of greater than ten years.
Surgery has not been shown to improve survival in men with low volume, Gleason Grade 6 (ISUP Group 1) prostate cancer. These men are better managed with active surveillance, with a plan to undertake surgery or radiotherapy if more aggressive disease develops. Intermediate risk cancers, however, clearly benefit from surgery, with improved overall and cancer-specific survival.
In high-risk or advanced disease, radical prostatectomy can be used in combination with radiotherapy and androgen deprivation therapy (ADT) as part of a multimodal approach to maximise cancer control and delay time to disease progression. Patients with high-grade cancers confined to the prostate have a good outcome after prostatectomy, as do locally advanced cancers through multimodality treatment.
What is the rationale for removing the lymph nodes?

Examination of the pelvic lymph nodes under a microscope is the best way to determine whether they have been involved with cancer. This information can be used to guide management after radical prostatectomy. For example, men with a small number of positive lymph nodes may benefit from postoperative radiotherapy and ADT.
Current European guidelines recommend that lymph nodes should be removed in men with intermediate risk prostate cancer if the estimated probability of having positive lymph nodes exceeds 5%. A pelvic lymph node dissection should be performed in all men with high-risk disease.
However, it has yet to be proven that removal of the lymph nodes, in and of itself, provides a survival benefit for men with prostate cancer.
What are the possible side effects of radical prostatectomy?

Men are more likely to recover erectile function after surgery if they have good erectile function to begin with, are younger than 60 years old, and have undergone nerve-sparing surgery. This recovery is gradual and can take several months. Some men notice their erections continue to improve for up to three years after treatment for prostate cancer. Nerve-sparing surgery is not appropriate if there is a risk of leaving cancer behind.
What is penile rehabilitation therapy?

Penile rehabilitation therapy involves taking medications to increase blood flow to the penis, thereby reducing the scarring of erectile tissue that occurs from prolonged lack of oxygen from not having erections. It is usually started within two months of surgery. Although the optimal treatment strategy is still unknown, a typical regimen may involve taking a small dose of Viagra or Cialis every night.
Is robotic surgery better than open surgery?

At the end of the day, the most important factor that will determine the outcome of prostate cancer surgery is the surgeon. Having said that, robotic prostatectomy has been shown to be a faster operation with a shorter length of hospital stay, lower blood loss, and lower transfusion rates when compared to open surgery.  Recent systematic reviews of major research studies have shown improved 12-month urinary continence, improved 12-month potency and equivalent early cancer outcomes with robotic prostatectomy compared with open and pure laparoscopic surgery. We currently await the longer-term results of a recent randomised-controlled Australian study, which found fewer perioperative complications with robotic surgery but no difference in functional (continence and potency) outcomes at 12 weeks.

As this is a surgical website, the discussion of radiotherapy shall remain brief. We recommend that interested patients seek the opinion of an experienced radiation oncologist.
Radiotherapy is generally offered as an alternative to surgery, particularly in men in whom surgery may not be appropriate. Radiotherapy has a role in multimodality treatment after surgery, and also for situations where not of all the cancer has been removed after prostatectomy. Surgery is still an option in situations where prior radiotherapy has failed to cure cancer, although in this setting the functional outcomes are worse.
How does radiotherapy work?

What is ADT?
Prostate cancer cells require the male hormone testosterone to grow. Androgen deprivation therapy (ADT) involves reducing the level of testosterone in the blood through medications or surgery, thereby slowing prostate cancer growth. ADT is administered as a series of injections, usually every three months.
ADT is often used concurrently with radiotherapy in a curative setting for localised disease. When used to manage metastatic disease the goal is no longer to cure the cancer but to keep it under control for months or years.
What are some of the side effects of ADT? 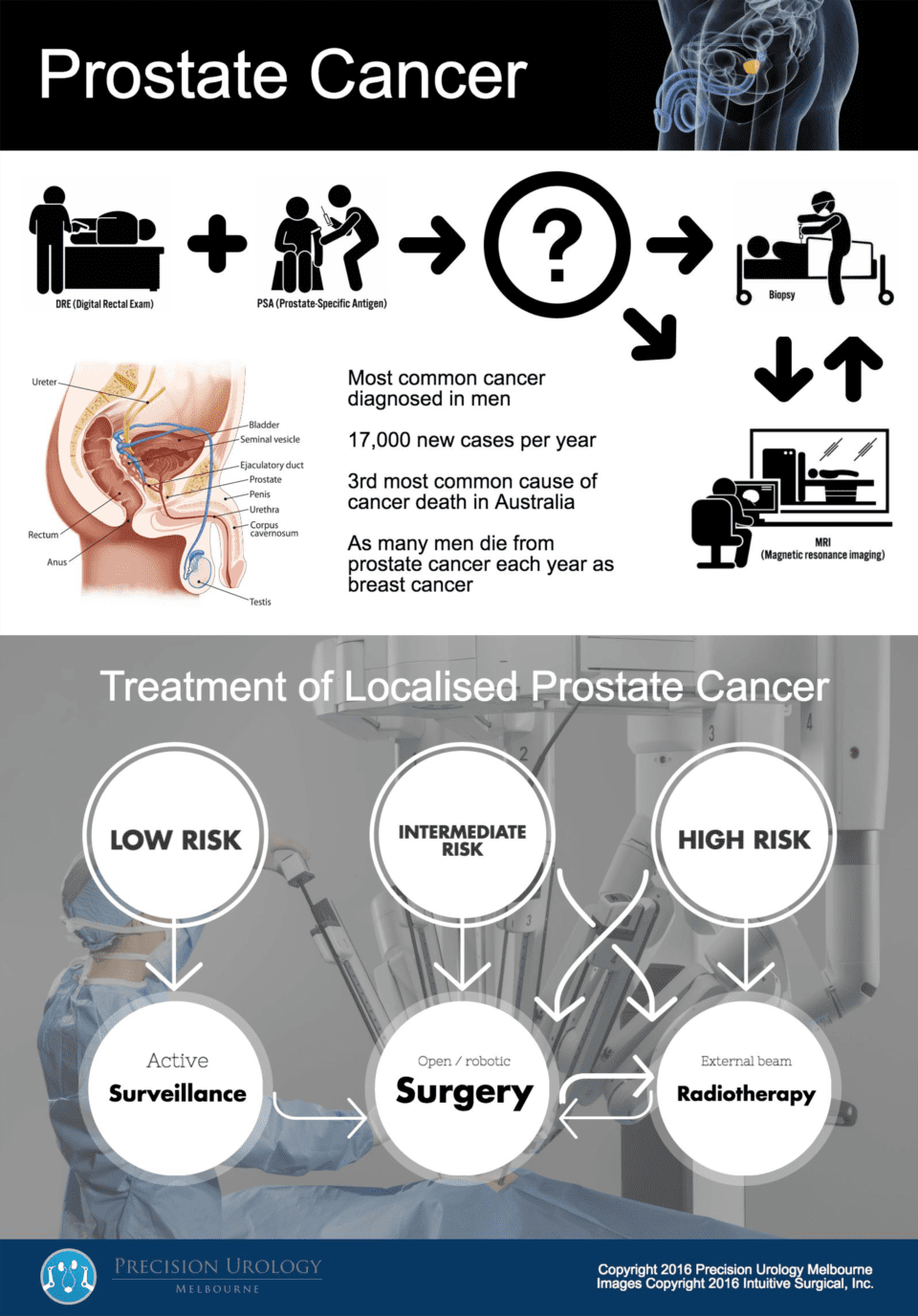