At Precision Urology we aim to provide the highest quality care for our patients. In addition to treating all general urology conditions, we offer unrivalled expertise in robotic and open surgery for cancers of the prostate, kidney, bladder and testis.

Radical prostatectomy involves removal of the prostate, seminal vesicles and, in many cases, the pelvic lymph nodes. It can be performed through either an open or robotic approach. In localised prostate cancer, this operation is used with the goal of cancer cure. In high-risk or advanced disease, radical prostatectomy can be used in combination with radiotherapy and androgen deprivation therapy (an approach called multimodality therapy) to maximise cancer control and delay time to disease progression. In most cases, prostatectomy is paired with robotic pelvic lymph node dissection for cancer staging purposes.

Partial nephrectomy involves removal of only that part of the kidney that contains cancer. Sparing as much tissue as possible reduces the risk of future kidney failure, especially in patients at high risk of chronic kidney disease due to pre-existing medical conditions. Where technically feasible, partial nephrectomy is considered the standard of care for smaller, localised tumours. It has the same cure rate as removing the entire kidney and can be performed through open, laparoscopic and robotic approaches.

Nephroureterectomy is performed for urothelial carcinoma, which is a cancer that arises from the cells lining the urinary tract. Since these cells are found in the ureter as well as the kidney, the entire ureter must also be removed. Nephrouretectomy can be performed through open, laparoscopic and robotic approaches.

Pelviureteric junction obstruction (PUJO) is a condition where the drainage of urine from the kidney is blocked, either due to narrowing of the ureter or an abnormal artery causing compression. This can cause problems such as frequent kidney stones, recurrent infections and kidney failure. In robotic pyeloplasty the obstructing tissue is removed and the ureter refashioned so that the kidney may drain properly. 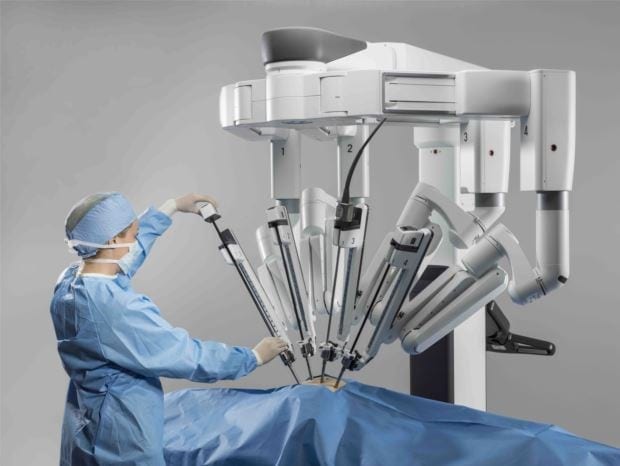 Transrectal ultrasound-guided (TRUS) biopsy involves taking multiple samples of the prostate using a special needle. The surgeon uses an ultrasound probe placed in the rectum to visualise the prostate and guide these needle biopsies. The procedure can be performed under local anaesthetic or light sedation and usually takes only a few minutes. Despite the routine use of antibiotics, this procedure carries a 2-4% risk of severe infection and may require hospitalisation.

Transperineal prostate biopsy differs from transrectal biopsy in that the needles pass through the area of skin between the anus and scrotum, called the perineum, rather than through the wall of the rectum. It offers the advantage of more complete prostate sampling with minimal risk of severe infection. Transperineal biopsy, however, takes longer than transrectal biopsy and requires a general anaesthetic.

Radical prostatectomy involves removal of the prostate, seminal vesicles and, in many cases, the pelvic lymph nodes. It can be performed through either an open or robotic approach. In localised prostate cancer this operation is used with the goal of cancer cure. In high-risk or advanced disease, radical prostatectomy can be used in combination with radiotherapy and androgen deprivation therapy (an approach called multimodality therapy) to maximise cancer control and delay time to disease progression. 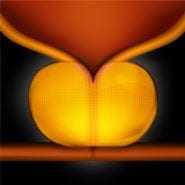 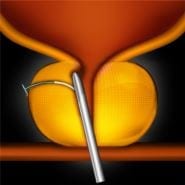 The UrolLift device delivers implants to compress the obstructing prostate tissue, opening a channel for urine to flow 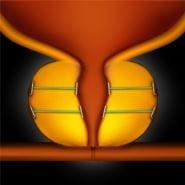 The UroLift System is a new, minimally invasive approach to treating BPH for patients looking for an alternative to drug therapy or more invasive surgery. The system utilises tiny implants to lift and hold the enlarged prostate tissue out of the way so it no longer blocks the urethra. There is no cutting, heating or removal of prostate tissue. Most patients go home the same day with rapid symptom relief, and should the procedure fail (13%) other treatment options are still available. The main benefit of this procedure is preservation of ejaculation, which is often lost after TURP and medical therapy.

During transurethral resection of the prostate (TURP) the part of the gland causing blockage is removed piecemeal using instruments that are passed through a telescope down the urethra. Depending on the size of the prostate, the operation can take between 30 minutes to 1 hour. The patient stays in hospital for 1-2 days to allow the bladder to be washed out via a rubber tube called a catheter. The catheter is removed once the urine is clear.

A bladder neck incision is used for patients with small prostates, who are at increased risk of bladder neck scarring with conventional TURP. Instead of removing prostate tissue as in TURP, the gland is cut at strategic locations to allow the tissue to spring open. The operation usually takes about 15 minutes to perform, and the patient often stays in hospital overnight with a urinary catheter.

The simple or open prostatectomy is used in men with very large prostates, in whom a traditional TURP may not be feasible. An incision is made in the lower abdomen and the enlarged prostate tissue is removed as one or two large pieces, leaving a shell of normal tissue. This should not be confused with radical prostatectomy, which is a cancer operation that aims to remove all prostate tissue. With newer medications and technology this operation has become quite uncommon.

Some men with benign prostate enlargement develop stones in the bladder as a result of poor bladder emptying. These stones can be broken down and removed, often at the same time as TURP, using either a laser fibre or special instruments passed down the telescope.

Partial nephrectomy involves removal of only that part of the kidney that contains cancer. Sparing as much tissue as possible reduces the risk of future kidney failure, especially in patients with pre-existing conditions like diabetes or heart failure. Where technically feasible, partial nephrectomy is considered the standard of care for smaller, localised tumours and has the same cure rate as removing the entire kidney. Partial nephrectomy can be performed through open and robotic approaches. 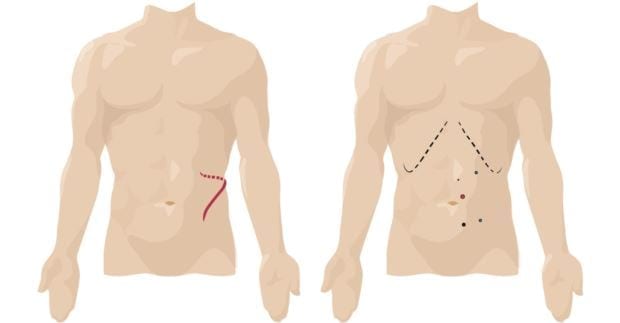 Radical nephrectomy involves removal of the entire kidney. This approach is used for large cancers that have started to grow into the major veins or into the fat surrounding the kidney, or for smaller tumours in locations that are not suitable for partial nephrectomy. High-risk patients may also benefit from removal of nearby lymph glands if these glands appear enlarged on preoperative scans. Radical nephrectomy can be performed through open, laparoscopic or robotic approaches.

Nephroureterectomy is performed for urothelial carcinoma, which is a cancer that arises from the cells lining the urinary tract. Since these cells are found in the kidney and the ureter, the entire ureter must be removed along with the kidney. Nephrouretectomy can be performed through open and robotic approaches.

Ureteropyeloscopy involves passing a long, narrow telescope through the urethra and bladder, into the ureter and up to the stone. A laser fibre is then used to fragment the stone into smaller pieces. In most cases these fragments can then be extracted. This approach is particularly useful for smaller stones, and allows treatment of stones in the ureter and kidney at the same time.

In Extracorporeal shock wave lithotripsy (ESWL), high energy shock waves generated outside the body are focussed onto the stone, causing it to fragment into smaller pieces. These fragments then pass out in the urine.

In percutaneous nephrolithotomy (PCNL), a channel is developed through the skin and muscle of the back, into the kidney. Instruments are then passed through this channel to break up and remove the stone. PCNL can be used for any stone in the kidney, regardless of size, location or composition. However, this is a more invasive operation with a wider range of complications.

All patients with bladder cancer require a procedure called a transurethral resection of bladder tumour (TURBT). In this operation special instruments are passed down the urethra to the bladder via a telescope. The tumour is cut out using these instruments and the pieces are extracted via the telescope. Further treatment will depend upon the pathologist’s assessment of the resected tumour.

This operation involves removing the bladder and the pelvic lymph glands, along with the prostate and seminal vesicles in men, and the uterus, ovaries and anterior vagina in women. It is the gold standard treatment for muscle invasive, non-metastatic bladder urothelial carcinoma. With removal of the bladder the urine coming from the kidneys must be diverted in some way, and this usually takes the form of an ileal conduit or a neobladder. Studies show that patients report a similar quality of life for the various types of diversions.

An ileal conduit is a short segment of bowel that is isolated from the rest of the gut. Both ureters, the tubes draining urine from the kidney, are attached to one end of the conduit. The other end of the conduit is brought to the skin as a stoma. The ileal conduit requires a patient to wear a bag on the skin to collect urine, which is then emptied when it gets full.

A neobladder involves using a longer segment of bowel to fashion a pouch to store urine, thereby avoiding the need for a stoma. To be suitable for a neobladder a patient must have good hand-eye coordination, good kidney and liver function, good bladder control, and no evidence of local spread of cancer. Given the complexity of constructing and managing a neobladder, this approach is not appropriate for elderly or infirm patients.

This operation involves removal of the testis through an incision in the groin. This approach minimises the risk of spreading cancer and also gives the best indication of the local extent of the disease. The patient usually goes home the same day.

When testis cancer spreads it usually travels first to the lymph nodes on the back wall of the abdomen, an area called the retroperitoneum. If cancer persists in this location after a course of chemotherapy it needs to be removed surgically. This operation is called a retroperitoneal lymph node dissection and is performed through an incision in the abdomen.