Kidney cancer is the 10th most commonly diagnosed cancer in Australia, affecting 12 in every 100 000 people each year. Commonly diagnosed in people between the ages of sixty and seventy, it affects men more commonly than women.

We don’t know the exact cause of kidney cancer, but we do know that smoking, obesity, and high blood pressure are risk factors. Additionally, there exist a number of rare hereditary syndromes associated with kidney cancer.

We classify kidney cancer according to its appearance under the microscope. There are many different types of kidney cancer, each with different sets of genetic mutations and differing degrees of aggressiveness. Of the three main types of kidney cancer (“clear cell,” “papillary” and “chromophobe”), clear cell renal cell cancer behaves in the most aggressive fashion. Cancer can also spread to the kidney from other sites, such as lymphoma, lung, breast or uterus.

How do we diagnose kidney cancer?

In the past, patients would be diagnosed with kidney cancer when they presented with symptoms of advanced disease, such as blood in the urine, a large mass in the abdomen or the presence of pain. Nowadays, it is more common for kidney cancer to be detected by chance, usually after an ultrasound or CT scan for other causes. When this happens the cancer is usually smaller and less likely to have spread beyond the kidney.

CT scans are an important tool for assessing kidney cancer as they provide information about the size and local extension of the tumour, the function of the other kidney, and whether any other organs are involved. MRI is useful in patients who cannot have CT scans due to intravenous contrast allergies or pregnancy. A bone scan or brain MRI may also be required in patients with symptoms suggestive of cancer spread.

What are benign tumours of the kidney?

About one in four kidney tumours smaller than 4cm will be benign. A benign tumour is not cancer. It will not spread outside the kidney to other organs or shorten a person’s life. However, benign tumours can grow over time and cause symptoms such as pain or bleeding.

Angiomyolipomas (AMLs) are benign tumours of the kidney that are composed of blood vessels, muscle fibres and fat. They are most commonly diagnosed in women aged 40-60, and as they grow larger they can spontaneously bleed, requiring emergency treatment. In most cases, tumours that appear to contain fat on CT scan and ultrasound can be confidently identified as AMLs without needing further tests. When small and asymptomatic they can be safely watched. Given the increased risk of bleeding during pregnancy, women of childbearing age should undergo treatment.

Cysts are fluid-filled sacs within the kidney. They are very common and are almost always benign. However, if a kidney cyst has suspicious features on CT scan, such as thick internal walls or solid regions, then it should be considered cancerous and treated as such.

Oncocytomas are benign tumors that cannot be distinguished from kidney cancer using imaging tests. The only way to confirm that a tumor is an oncocytoma is by examining it under a microscope, either after biopsy or surgical resection.

When does kidney biopsy have a role?

Kidney biopsy involves passing a needle through the skin to obtain a sample of tumour tissue. This can provide a diagnosis without actually removing the entire tumour or the entire kidney. It is usually performed under local anaesthesia and with CT or ultrasound guidance.

Biopsy is appropriate for patients with small kidney tumours planned for observation, in patients planning to undergo non-surgical treatments such as radiofrequency ablation, and in cases where a kidney mass may represent cancer that has spread from another part of the body.

Biopsy is not required in patients with malignant-appearing tumours for whom surgery is planned.

Kidney biopsy provides the best results when performed by an experienced radiologist and the tissue examined by a pathologist with an interest in kidney cancer.

What are the different treatment options for kidney cancer?

Cancer that is confined to the kidney requires surgery for cure.

Partial nephrectomy involves removal of only that part of the kidney that contains cancer. Sparing as much tissue as possible reduces the risk of future kidney failure, especially in patients with pre-existing conditions like diabetes. Where technically feasible, partial nephrectomy remains considered the standard of care for smaller, localised tumours and has the same cure rate as removing the entire kidney.

Patients with kidney cancer in a single functioning kidney must undergo partial nephrectomy to avoid dialysis. Partial nephrectomy is also recommended in patients with pre-existing poor kidney function, or those with familial cancer syndromes who may require multiple operations during their lifetime.

Radical nephrectomy involves removal of the entire kidney. This approach is used for large cancers that have started to grow into the major veins or into the fat surrounding the kidney, or for smaller tumours in locations that are not suitable for partial nephrectomy. High-risk patients may also benefit from removal of nearby lymph glands if these glands appear enlarged on preoperative scans. Radical nephrectomy can be performed through open, laparoscopic or robotic approaches.

When is it safe to watch a kidney tumour?

Observation is appropriate in elderly patients with major coexisting medical conditions. In these cases, we would monitor the tumour over time with periodic imaging. We would intervene if aggressive features develop, such as a rapid increase in size or the emergence of new symptoms.

We do not recommend observation in younger patients, given the risk of progression to incurable disease during a patient’s lifetime. Also, as tumours grow, surgery becomes more complicated and kidney preservation may become impossible. 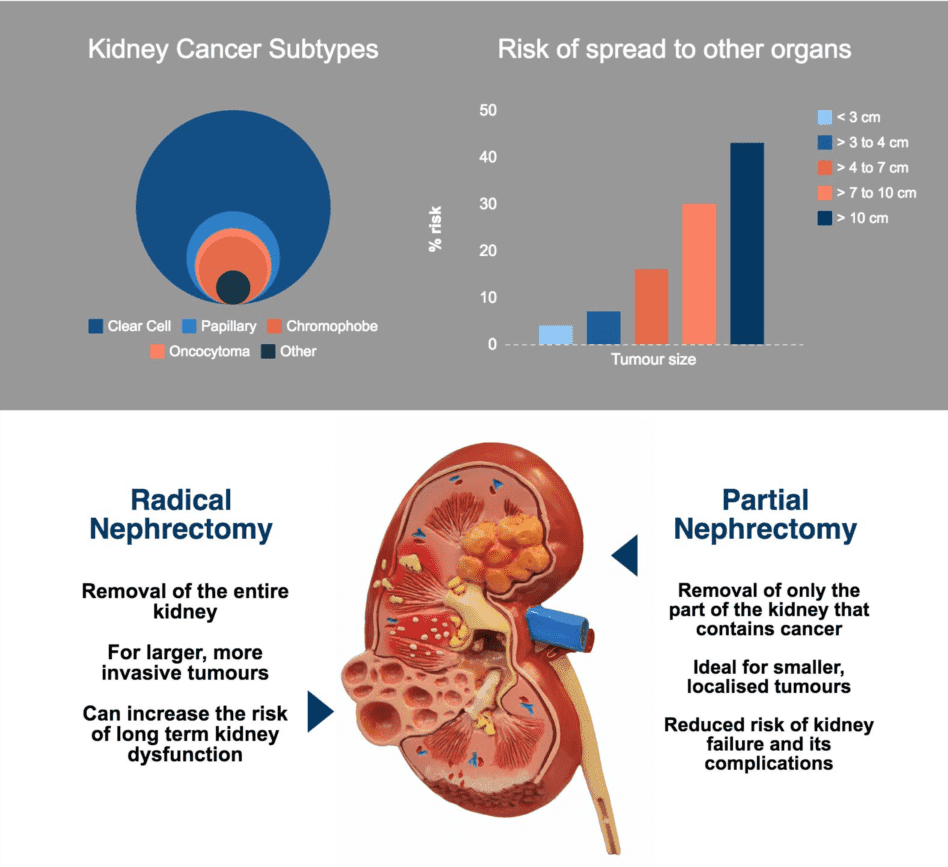